Last week at work was pretty bad.  I was having a very hard time finding the sunny side of anything.  I am usually good at “going with the flow,” but the flow turned into a torrent and by Friday night, it felt as if I’d been swept over the falls and put through the wash and spin cycle at the bottom.

Saturday morning, trying to resurface, I was piddling with notes and mail that had accumulated from the week and came across one of my favorite Dilbert cartoon strips.  As you can see from the color of the news print, I’ve had this awhile.  Finally, my ray of sunshine!  I enjoy reading Dilbert, even though I can’t say I always “get it,” but the connections between that workplace and mine are frighteningly close at times.  Thank goodness for humor to help get us through life.

Saturday evening about 7:30 or so 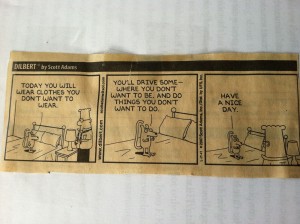 it started to rain.  The temperature dropped about 15 degrees and we sat outside on the covered patio, watching and listening to the rain, just enjoying being outside.  It was a nice way to bring the day and the week to a close.

The act of sharing ranks right up there in my list of favorite things.  For the most part, you “win” no matter which end you’re on – the sharing end or the receiving end.  And it tends to spur more of the same.  When my neighbor shared an oversized zucchini with me recently, it resulted in some zucchini bread for both of us.

My dear friend was kind enough to allow me to share (read: unload) my concerns and frustrations with her at lunch last Friday.  Getting all of that stuff out of my head and heart truly lightened my load – a pretty wonderful gift.  And I’m more than willing to do this for someone else because I know how much it means.

So today I’m going to share a simple recipe that someone shared with me.  It’s a new hot weather favorite side dish from Bon Appetit.  Enjoy!

My husband and I are people watchers and word watchers.   Put us in an airport and we can amuse ourselves for quite some time, simply watching the people moving around.  We both like to figure out what abbreviated license plate letters mean and we enjoy clever puns and phrasing that was meant to convey one idea, but can be read as something entirely different.

Not too long ago he asked if I had read the t-shirt on a guy we passed while walking around at a local shopping area.   I had not, so he told me what the t-shirt wording said:  “http colon splash.”  The word for the punctuation mark was spelled out.

I responded that it must stand for some kind of website.  After he complimented me on my insightful and helpful answer (he should be more appreciative, I think), he paused and then said, “The words ‘colon’ and ‘splash’ used together don’t do much for me.”

For any of you who have had a run of digestive issues or who have had the joy of preparing for a colonoscopy, you can certainly appreciate the unintended humor of the shirt.

Rather unfortunately, it also sounds like the name of a drink.  Maybe the GI docs should change the name of the prep mixture to “colon splash.”

I went to a funeral service last week for Larry, the father-in-law of a good friend.  It was a pretty typical funeral service with one exception:  the folding and presentation of the US flag.

Larry was a World War II veteran.  I’ve been to a couple of funeral services for WWII veterans, but this is the first time I have witnessed this presentation in person.

Because of the heat, the family chose to have the commitment, usually done at the graveside, inside the church as the closing of the service.  After the last prayer, the ministers remained silent as a naval officer in dress whites walked down the center aisle and stood at the head of the casket, where the flag’s canton of blue containing the stars lay.  He saluted.

Then came a sailor, also in dress whites, down the center aisle.  He took his place at the foot of the casket, at the end of the red and white stripes.  He saluted.  It was totally silent in the church.

They grasped the ends of the flag that covered Larry’s casket and stepped to the front side of the casket.  They folded the flag once; then again.  Then with purpose and care, the sailor began folding the flag in a triangular pattern, moving toward the officer.

As he got close to the field of blue and stars, he stopped, clearly unhappy with the work he had done. He unfolded the flag twice.  He gently but precisely worked the fabric to get the stars aligned in the proper way.  Then he refolded the triangles.  The officer tucked in the end of the flag, just so.  The sailor then held the folded flag for the officer’s final inspection, at which point the officer saluted.  He then took the flag from the sailor, who saluted, turned to face the congregation and quietly strode back down the center aisle.

The officer took the folded flag and walked over to Larry’s widow and family.  He removed his hat, leaned over to present her with the flag, and spoke a message to her on behalf of the President.  He put his hat back on, faced the congregation, saluted and then made his way back down the center aisle.

To be a witness to such a tribute was deeply moving. We are a more informal society these days; in some situations, this has been a good thing.  But it was inspiring to see this formal act of respect and remembrance.  I appreciate that the sailor cared enough to redo the folds, to do it “right”, because “doing it right” matters.

Do you observe any rituals?  If so, hold them dear.  Take the time and make the effort to continue.  Make sure the children, the grandchildren, the in-laws are a part of it, even if they whine and complain.  If you don’t have one, start one.  Our rituals are part of what knits us together as a family, a membership, a nation.

And to the two naval representatives who gave of themselves in service to our country and to Larry and his family that day, thank you.

This spring, I watched every night of “The Hatfields and McCoys” mini-series on the History Channel.  Good grief – that was nonstop fussing and fighting!  Unfortunately, it appears that things have not changed all that much in our country; there’s still a lot of fussing and fighting going on.  However, in spite of the fact that our country is made up of very fallible human beings (knuckleheads included), there is no other country I’d rather be a citizen of than the United States of America.

For me, the 4th of July is a day to be grateful.  Grateful I can write and read blogs without censorship.  Grateful I, and all the other females I know, can go to school…drive automobiles…walk through cities and towns without needing a male in the family to escort us. Grateful I can go to church openly and not fear for my life.  Grateful to the men and women who have chosen to stand in harm’s way to protect us at home and abroad.

No, our country is not perfect.  Yes, there is much that could be improved.  But folks, that ain’t gonna happen ‘til we have an individual and collective change of attitude.

In his book The Heart and the Fist, Eric Greitens writes, “…a good life, a meaningful life, a life in which we can enjoy the world and live with purpose, can only be built if we do more than live for ourselves.”  Now this is what I call a 4th of July attitude!  It’s a way of thinking and living that would light up a change for the better in our country!

So how about it, y’all?  This 4th of July, what will you do to make our great nation better?  Celebrate the USA’s birthday by doing something more than living for yourself.

In the meantime, I had to share the first stanza from a hymn we sang this past Sunday.  Just a little something else to keep in mind as you light up that sparkler.  Happy 4th!

This is my song, Oh God of all the nations,
A song of peace for lands afar and mine.
This is my home, the country where my heart is;
Here are my hopes, my dreams, my sacred shrine.
But other hearts in other lands are beating,
With hopes and dreams as true and high as mine.

Tucked Away for Posterity

If I Had to Group Them